Troy Anderson, left, and Keenan Schuur, co-owners of Coldwell Banker Associated Realtors in Fort Dodge, stand outside of a home for sale at 2826 N. 25th St.

Keenan Schuur, co-owner of Coldwell Banker Associated Realtors in Fort Dodge, enters in the code to unlock a home for sale along North 25th St. Schuur became co-owner of the brokerage Jan. 2.

The office at Coldwell Banker Associated Realtors, 1728 Central Ave., will look something like this when the remodel is complete. It will feature a new logo with a star above the letters CB. The star represents the north star, a place where you look for guidance, according to Keenan Schuur, co-owner of the brokerage. 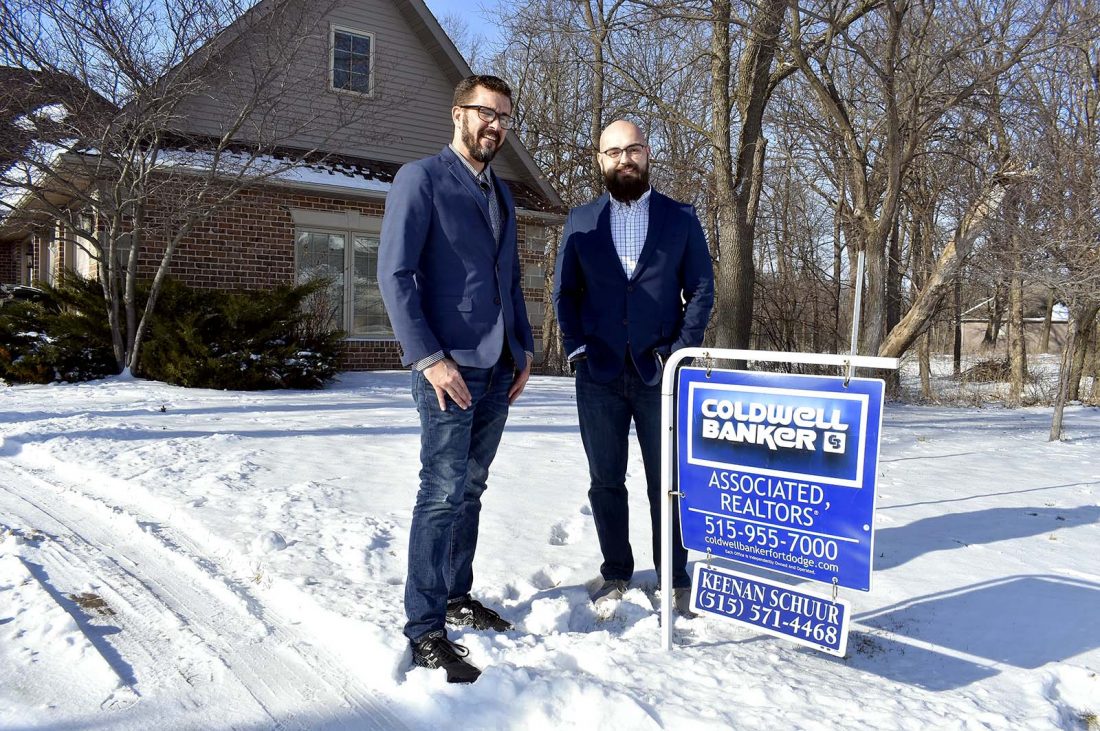 Troy Anderson, left, and Keenan Schuur, co-owners of Coldwell Banker Associated Realtors in Fort Dodge, stand outside of a home for sale at 2826 N. 25th St.

Keenan Schuur, who has been an agent at Coldwell Banker Associated Realtors for five years, has joined Troy Anderson as co-owner of the Fort Dodge brokerage.

Schuur, a 2007 St. Edmond High School graduate, obtained his broker’s license about a year ago. He became a co-owner on Jan. 2.

“Coldwell Banker (a national real estate brand) is big on succession planning,” said Anderson, who bought the brokerage and franchise from Chris Parker in 2015. “It’s making sure we have a plan in place. Keenan has proven himself in the real estate world and would be able to step in should something happen to me.”

Shuur said he’s looking forward to “sharing responsibility and moving forward to make sure we have a more cohesive group and attend to more agents as needed.”

Anderson said he enjoyed being a single owner, but there are advantages to having a partner.

The office at Coldwell Banker Associated Realtors, 1728 Central Ave., will look something like this when the remodel is complete. It will feature a new logo with a star above the letters CB. The star represents the north star, a place where you look for guidance, according to Keenan Schuur, co-owner of the brokerage.

“Having a person to bounce ideas off of and rely on when you need help is hard to recreate,” Anderson said.

Schuur said he has multiple goals.

“To continue building our agent base and making sure they are successful in their own right and maybe looking at any other agents that might want to come on board and continue serving the public the best we can,” Schuur said.

Schuur will also look to keep Coldwell Banker on the cutting edge of the digital realm of the real estate business.

“Fort Dodge has always been last to hit some of the trends you see nationally,” Schuur said. “Photography and video has been huge. The increase in the quality of photography is huge. You can’t just snap a couple of pictures anymore. Buyers and sellers are looking for quality images.” 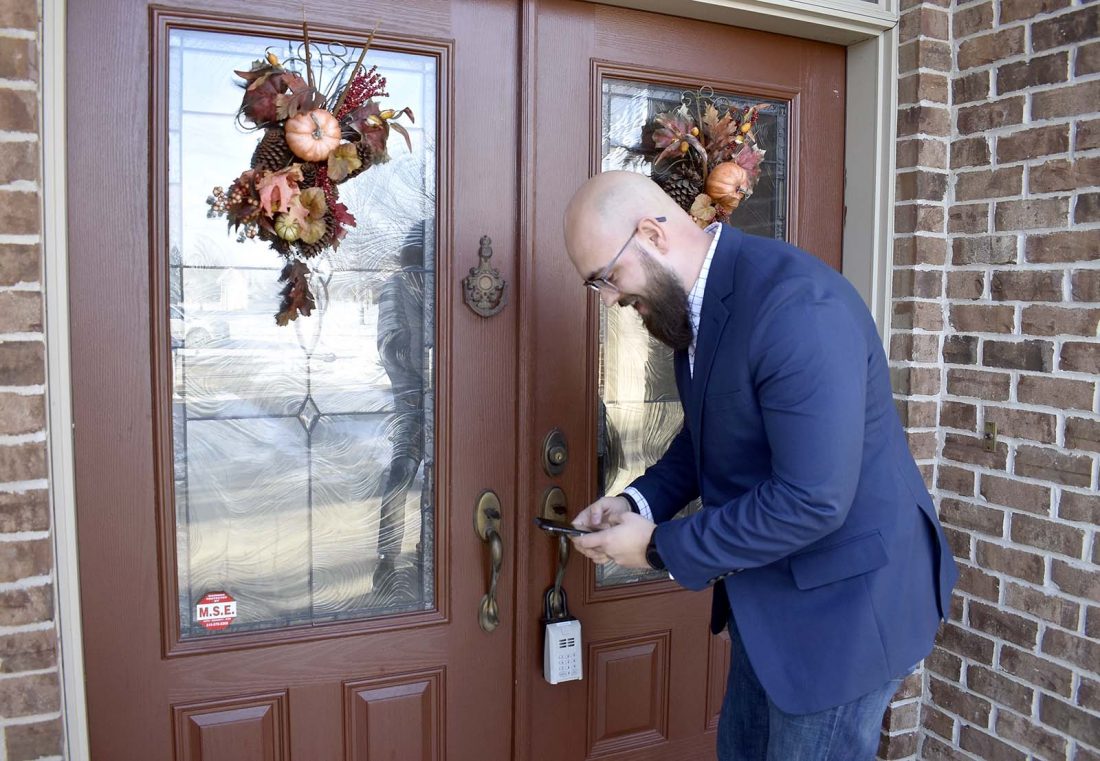 Keenan Schuur, co-owner of Coldwell Banker Associated Realtors in Fort Dodge, enters in the code to unlock a home for sale along North 25th St. Schuur became co-owner of the brokerage Jan. 2.

And Schuur said videos of homes on the market are on the rise.

Anderson, who has been a realtor since 2006, said the digital age has impacted real estate dramatically.

“When I started, paper was king,” Anderson said. “The internet was there, but it was a small tool to an agency. In the past 15 years it has changed over to paper is a tool in digital marketing.

“People want instantaneous responses and results. They want to see it right away. The digital marketplace can give that to people. It’s about hitting the digital places first and follow with paper marketing tools. They are still useful but take longer to develop and be received.”

The way realtors communicate with clients has also become subject to the digital age.

“Fifteen years ago you didn’t call someone on their cell phone or text them,” Anderson said. “Now it’s 75 percent text and the remainder is email and sometimes a phone call.”

Schuur added, “It makes our industry very mobile in that way.”

Coldwell Banker is refreshing its look with a new logo. And in Fort Dodge, the office at 1728 Central Ave., is being redesigned.

“It has been a project I have been working on for three years,” Anderson said. “Updating not only the aesthetics and cosmetics, but making a better workplace for all of us. Rearrange things in a better way, direct people in the right areas. Clean it up for our clientele. It should be more of an open, modern feel.”

“You look to the north star for guidance and look to us for guidance in the real estate market as well,” Schuur said.

Anderson added, “It will show its face in our digital branding and our signs.”

Buying or selling property can come with its share of complications. That’s why working with a realtor can be an advantage at all stages of the process, according to Schuur.

“As a buyer, if you work with a realtor you will gain knowledge on the market and what’s out there,” Schuur said. “They will know what’s coming and be able to give a price range. It’s their job to siphon through the listings to find what you are looking for.”

Schuur added, “From the offer to closing day, realtors in our market handle everything.”

From the seller’s perspective, Schuur said it’s the realtor’s job to price the property accordingly.

“We have to use our knowledge and data to pinpoint a really good price opinion for your property,” Schuur said. “And we take it and make sure the property is marketed appropriately.”

Anderson characterized the market as “a little slow, seasonally.”

“In a year over year perspective, we still have a tight inventory,” Anderson said. “The most sought after properties are in the Cooper, Feelhaver and similar areas. Kennedy Brown.”

Schuur said having low interest rates has been an advantage.

“It helps that interest rates are still really low,” Schuur said. “That plays well into the economy — nationally, locally and across this state.”

Schuur was born and raised in Fort Dodge. He graduated from St. Edmond High School in 2007.

Schuur holds a bachelor’s degree in marketing and management from Buena Vista University.

“I worked 10 years at Hy-Vee,” Schuur said. “I started there when I was 14, so I have been working since a fairly young age.”

Previous experience also includes working as a sales agent at Hy-Capacity in Humboldt.

Keenan Schuur is a member of Noon Sertoma. He’s also in the leadership program with the Greater Fort Dodge Growth Alliance.

According to information on its website, Coldwell Banker Real Estate LLC, founded in 1906, is the oldest national real estate brand in the United States and today has a network of more than 87,000 affiliated agents in approximately 3,000 offices in 49 countries and territories.

Its Fort Dodge office has been in existence since 1985. The brokerage includes eight agents.

[ad_1] We get questions each week from founders attempting to know elevating capital on-line. Since 2014, our company…

[ad_1] Funnel, the Stockholm-based startup that gives expertise to assist companies put together — or make “business-ready” —…